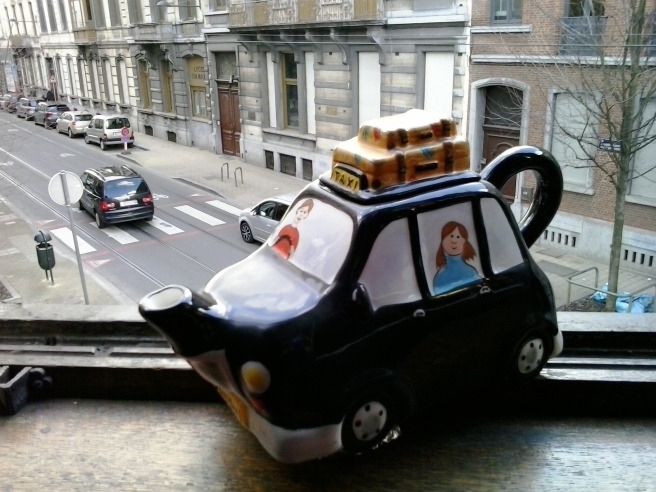 My London Taxi Teapot, by Teapot & Co., given to me by a friend whose kids I used to drive to school.  You can see our street and neighborhood in the background.

Nothing, they say, is certain except for death and taxes.  I would like to add something else that is certain – and that is grace.  Which sometimes manifests itself in taxis.

It was cold and dark, and I was tired.  Carlton and I were headed, with our friends Jay and Teri who were staying with us, to another friend’s 50th birthday party not so far away, near the North train station.

We really could have walked.  It is only about a 15 minute walk, and all downhill from here. (In America, such a suggestion would be taken as ludicrous, but here in Brussels it is totally normal to think about walking such a distance.)  Or we could walked a couple of hundred meters and taken a tram and then walked a few hundred more meters.  We even could have taken our own car.

But the walk would have taken us straight through the red light district, which is particularly unsavory at night, making us prey to pickpockets.  And taking the car would have meant giving up the nice convenient parking space right in front of our house, only to drive around fruitlessly seeking another one in front of our friend’s apartment, and then repeating the process back at home – probably ending up somewhere back on the edge of the red light district.  It looked like the tram was the only decent option.  I sighed as I put on my coat.  I wanted to go to the party – I just didn’t want to have to travel there first!

I don’t know if it was Jay or Teri who first suggested we get a taxi.  I think I made one of those little derisive snort-laughs.  We are not in the habit of getting taxis, which are expensive and definitely not plentiful in our somewhat sketchy neighborhood.  A taxi never comes into our quartier looking for a fare.  If we were to get a taxi, we would have to go back in to the house and call one, and then wait for 20 minutes while it came.  No, I said (like the martyr to my sore feet that I was feeling): We will just have to take the tram.  But Carlton took out his phone, taking pity on his tired wife, and started looking up the taxi number as we walked outside.

And then it happened: a miracle.  A taxi was cruising down our little side street, right in front of our house.

You have to know that this never happens.

Teri rushed out and flagged it down.  It didn’t seem he was going to stop at first, but then he rolled to a halt.  It turned out that he was just off duty, and had picked up a friend in our neighborhood to watch the football match at a bar.  But he agreed to take the four of us to the North Station, and we all piled into the back seat.  We all exclaimed at the serendipity of finding a taxi on our own street (which never happens), and Carlton remarked to the driver, “I think God wants my wife to know that he loves her.” On the way there, the taxi driver regaled us (as taxi drivers do) with stories of the two years he had lived in America, exporting athletic shoes to Turkey and selling them at a great price.  And when we got to the station, he charged us just a little over what it would have cost the four of us to take the tram.  (We had a great time at the party.)

Later, I got to thinking over that remark of Carlton’s: “I think God wants my wife to know that he loves her.”

Do I need to have things like miracle taxis just to know God loves me?  Wouldn’t it be just as true that God loves me if we had taken the tram?  Wouldn’t God’s grace be just as certain if we had chosen to walk through the red light district and gotten our wallets stolen?  Or even gotten mugged and beat up?

Ann Voskamp, in her book 1000 Gifts, recounts a story of her son almost severing his finger.  When the finger is saved, her mother breathes in relief, “God’s grace, God’s grace.”  And as Ann thinks of another family who lost their son the same week, she finds herself uncomfortable with the thought that God’s grace is only revealed in the “good” things we receive from him.

What do taxis and grace have to do with each other?

Many years ago, Carlton and I read a little book by Derek Wood, called Lord, Find Me a Parking Place!  The book warns of the dangers of making God into a personal blessing factory, of reducing him to an idol that is there to make things comfortable and convenient for us.  We can treat God like a vending machine who dispenses what we want when we put in the right currency – prayers, good deeds, regular quiet times, whatever.

We look to God for good things and then post them on Facebook with the hashtag #feeling blessed.  But does that lead us into the trap of being like Job’s wife, accepting good from God and not trouble (Job 2:10)?

It certainly can.  Oh, so subtly, we can begin to focus more on the gifts than the Giver, and a creeping sense of entitlement begins to take over our souls.  God’s grace becomes graft.

And yet… I really did feel loved when that taxi came rolling unexpectedly down our street.

Shall I accept trouble from God, and not good?

Being open to the grace of God in all things also means accepting these small unexpected gifts he gives me with gratitude, with the same kind of warming of my heart as when Carlton comes in with a bunch of flowers, just for no reason.  Coincidences seen and accepted as grace increase my sense of his care for me in the quotidian things, the food on the table, the electricity in my plugs, the shoes in my closet.  Nothing is certain, really, but God’s grace – not even death or taxes.

Even the old parking place prayers have become a little tag team in the grace game between God and me.  I used to think myself loftily above praying for a parking place – until I moved to Schaerbeek.  Here, every night, cars park on crosswalks and in other illegal places, just because there is no place else, and must be moved in the early morning before a ticket is given.  We are supposed to have a reserved place, because we have a garage; only we are allowed to park in front of it (as evidenced by the license plate on the door).  But many times, someone else has parked there, especially when at night places reach a premium, and we must park elsewhere. Now, we could have these people towed, but this takes lots of time and makes enemies.  It isn’t worth it.

This parking place struggle has been the cause of more spiritual angst for me over the last few years than any theological issue I have wrestled with.  I round the corner with anxiety: will the place be empty?  I see the car parked boldly in front of the garage, and flood with anger: no, it’s not!  I used to actually kick the tires of these cars frustratingly blocking MY spot.  (Then one time I broke someone’s hubcap – which was the end of kicking tires.)  It would take me literally an hour to come down from the temper rush.  How embarrassing to call myself a Bible teacher and be spiritually defeated by a few meters of asphalt!

So I did start praying for a parking spot.  And I am surprised how often God gives me one, especially late at night.  It is like a little “unforeseen kiss,” as the song says, and I feel God’s love and care for me.  But when I pray for my spot and it is taken, I hear the Spirit whisper that I am not entitled to anything – and it is my turn to extend his grace to someone else.  So if and when I listen and do it, instead of following my temper-prone instincts, I get grace when I get a space, and also when I don’t.  The praying is important – not so that I put in my coin and get out what I want, but so that I keep in step with the Spirit.

And sometimes I don’t even pray, and still taxis turn up to take me places.  Why should I take this grace for granted?  Why shouldn’t I thank him and let it warm my heart, that the God who has his eye on the sparrows knows when I am too tired even to take the tram?

There’s nothing certain in taxis, but everything in God’s grace.